The inferior performance of the previous LED lighting system meant that it was unusable under high magnification. Straight after that first attempt I ordered a new set of LEDs that have a significantly higher rating.

The Philips Luxeon Rebel series of LEDs come in various wavelengths and third parties offer lenses and baseboards for them. To recap: I need my light system to fulfill three requirements:
a) small size so it fits into the system
b) bright enough to allow working under high magnification
c) narrow light beam so that the bright light doesn't disturb the animal

So for the next generation of my light system I picked what is technically an RGB mixer lens which produces a  +/- 6° beam + baseplate that doubles as breakout board for the LED contacts and a heat-sink mounting point. Instead of Red, Green and Blue I just put in 3 high-power white LEDs.

a) Small Size so it Fits into the System

When the LEDs arrived it became clear that size won't be an issue. In fact, one problem with the LEDs is how small they are. Don't be fooled by the amount of light they are producing, they are about 2 x 5 mm. On that space are 3 contacts: cathode, anode and heatsink. All of which are in the same plane on the underside. This means, arranging 3 LEDs so that they are connected in series AND have good contact with the heat sink becomes next to impossible. Luckily there are also baseplates available which break out the contacts and allow to easily to attach a heatsink to its bottom. 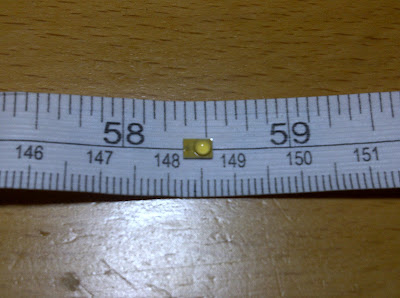 While it is possible to put solder on all of the contacts, heating the contacts all up again to solder them down is next to impossible because they need to sit flat on the baseboard and there is no way to access to contacts with a standard soldering iron once they are in place.

A technique called reflow soldering was the best way to deal with this problem. In brief, you apply a paste that contains solder to the contacts and stick the components together. This is followed by applying heat until the paste melts and turns solid. I haven't used this technique before, but it seemed straightforward enough and there is a great tutorial on the Sparkfun website how to do this with a skillet (or any hot surface for that matter).

After finding a workshop that had some soldering paste (easier said than done) and finding a hotplate (which we usually use to gently heat and stir delicate solutions...) I carefully applied paste to the contacts and popped the LEDs on it (see pictures below). After that I slid it on the hot-plate and waited a few seconds until the solder melted and made contact with the LED.

Instead of building my own circuit to drive the LEDs I decided to invest into a LED driver. Very conveniently it takes 24V DC input and produces 3 - 33V output (depending on how many LEDs are connected in series) at 1000mA max. current. It has a an analogue and digital dimmer pin to adjust brightness.


One problem with such powerful LEDs is thermal management. The LEDs have a maximum temperature of 135°C, which means you can run them at full power without a heat sink for about 5 seconds before they blow (or melt?). The baseplate provides a small amount of cooling, but far too little. While one can go into long and complicated calculations how much heat-dissipation is required I simply picked a generously sized heat sink, some heat-transfer tape and stuck it to the baseplate. Well... it wasn't enough. I ended up combining two heat sinks until I felt comfortable with the amount of dissipated heat (which I professionally assessed by touching the heat sink every minute or so and checked how hot it is). There is a heat sink calculator on this excellent website but I ended up not using it as I had the heat sinks ordered before I discovered it.

The lens for the LEDs fits perfectly and slots into the baseplate. I've used some superglue to fix it, hoping that the LEDs stick to their promise of lasting for the next 9001 (or so) years.


b) Bright Enough to Allow Working Under High Magnification

The brightness of this assembly is really quite remarkable. I've made the mistake of looking straight at the LEDs without the lens on when I turned it on for the first time. It took a while until I regained full vision. Each of these LEDs at full power (i.e. at 1000mA (!!) ) produces 310 lumens according to the manufacturer. These LEDs are rated in lumen rather than microcandela (mcd) which makes it hard to compare to the previous set of LEDs I had and it is difficult to convert between these units so I won't try. According to the internet, a 60W incandescent light bulb has about 800 lumens. Keep in mind that a 60W bulb can light up an entire room quite easily. My LEDs with the lens focus ~85% of its 930lm in a +/-6° beam. Here is a comparison between the two systems I've made:

This is the only point in which the new LEDs lack behind the previous system. The lenses are not focusing the light well enough. That said, I could build a shield to focus the light in a narrower beam. However, I've found it easier to make a little cover that blocks the light from shining directly into the mouse's eyes without blocking the its view onto the virtual reality screen. While the mouse can still see the entire environment lighting up, none of the intense light is frying its retina.

Having tested the new lighting system in an experiment and compared it to the old I can say that the difference is like day and night - literally. A key disadvantage of the new system is that the light is less focused and therefore I can't avoid the eyes of the mice but with a small shield this problem is easily circumvented. An upside of the light intensity is the fact that I can place it further away, and therefore its even less in the way. The fantastic brightness means that whatever worries I had about illuminating the brain surface are now gone.
Posted by Lukas at 03:49