I didn't show any up close pictures of the new holders in the previous post, here are a few: 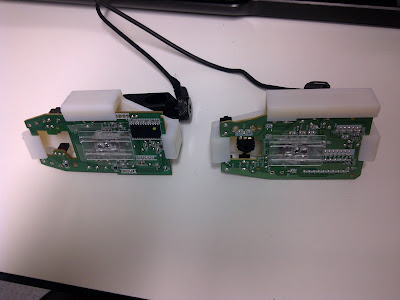 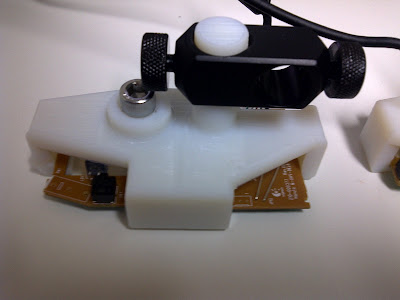 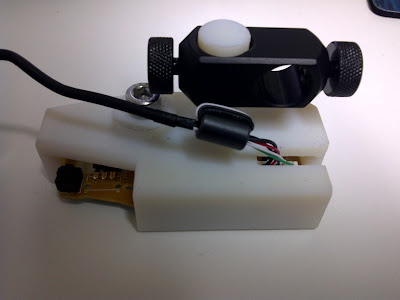 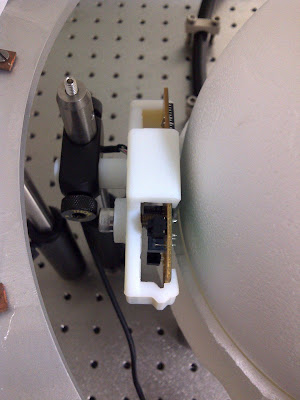 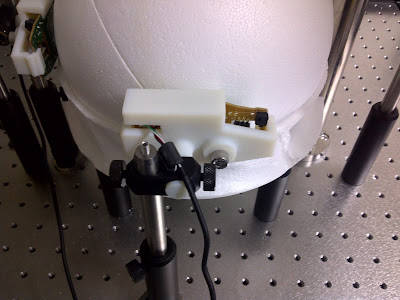 Any questions? Leave a comment or e-mail me.
Posted by Lukas at 05:06 No comments:

Apples and Oranges that look like Apples (Motion Tracking 2)

if you haven't done so, read this post first to make more sense the following one.

One of the problems with my initial solution was that the holder for the optical mouse was too big and collided with the treadmill base when I tried to position it. To circumvent this problem I designed a new optical mouse holder that would have a smaller spatial profile. Here is the result:


When it arrived it fit very well around the optical mouse. Mounting it on my setup worked very well too and it allowed me to mount the mouse where I needed it. In fact it was so nice I wanted to order another one straight away without waiting for the second Dell mouse to arrive. Being overly careful as I am I decided to wait for it, and that was a good decision...

When the new mice arrived I was in for a surprise. I openend it and looked whats inside. The exterior is, for all intents and purposes the same, the inside however isn't. First warning: looking at its USB signature revealed the new mice were made by a different manufacturer. Turning the new mouse on its back showed a slightly different sticker informing you about the technical details nobody really cares about.

Much worse than the different shapes was the fact that the new mouse would not cooperate with the python code I've developed over about two weeks. If you've tried to read directly from the USB bus before you'll know what a massive pain it is to get the operating system to cooperate with you. More on that in a future post on the software side of the motion tracking. I tried desperately to find the exact same mouse in one of the other offices and exchange it, but, as it turns out, the one I needed was only delivered in a very small time window and is now phased out. Sigh. In any case, this unexpected non-compliance of reality with my expectations caused me to lose about one week to find a new way to read from two mice independently and re-model the mouse holder.


The only thing still missing now is the reward system. I've been waiting for that order for almost two months now and if that company wouldn't be the only one I found that makes those particular valves I would have rejected that order weeks ago. With a bit of luck there will be a post on that soon. Also, I will post information about the software side for the motion tracking system in the not-so-distant future.
Posted by Lukas at 05:16 1 comment: