In an attempt to improve my methods another of Andrew's ideas came to mind: expanding foam. Usually you use this to fill gaps in walls. Whatever it touches while it's still wet becomes a sticky mess, but it's great at keeping stuff in shape. So I mixed up some papier mache from the remaining pulp and did this: 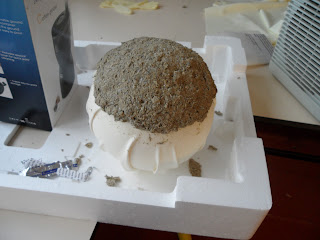 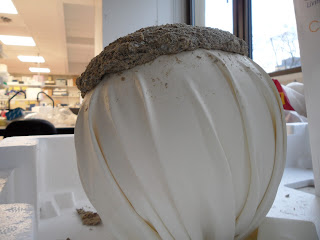 Frankly, I had a  hard time not drawing a face on this. The cup is smaller, far from a half-sphere, but should still be suitable to create an aircushion.

After allowing it to dry for about 5 hours (with an electric fan) I topped it off with expanding foam: 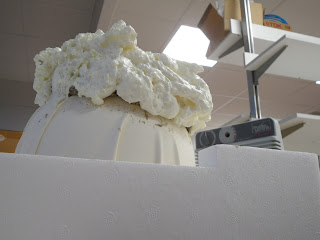 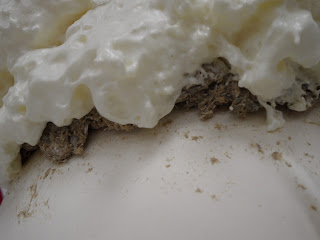 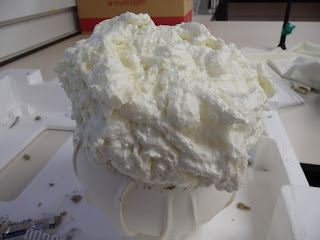 Yes, it doesn't look great, but it does the job. I left it overnight to dry and took it off the next day with this result: 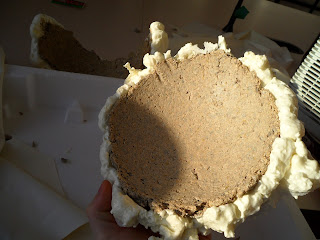 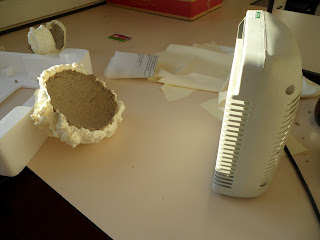 It was still wet on the inside, but once it's dry it will get air-inlet holes centered around the south-pole and from hopefully will make the ball hover.
Posted by Lukas at 04:41 No comments:

Latex (not the writing software) and how the first attempt failed.

To model the papier mache around the styrofoam ball and yet have some clearance we require something that is very elastic and fits tight. Andrew Downie suggested (industrial) latex, which, as it turns out, was a great idea. It's not easy to fit anything around a sphere without folds, but with enough force, anything is possible: 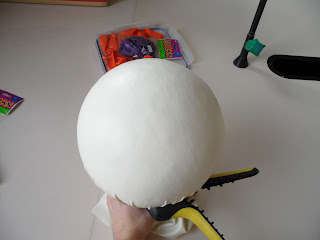 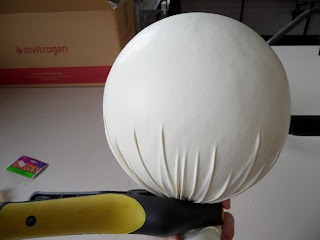 Put the latex over the ball, grab it at the bottom and twist it until there are no folds anymore. This is easier said that done, but with a bit of trial and error it should be doable. The clamp helped keeping it in position, but you will need patience: it can be VERY frustrating to place the clamp without un-twisting the latex (there is a lot of torque!). Everytime that happens you have to start all  over again. 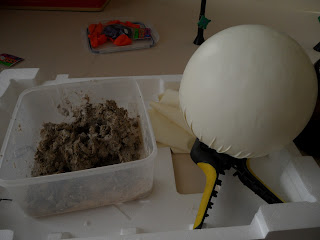 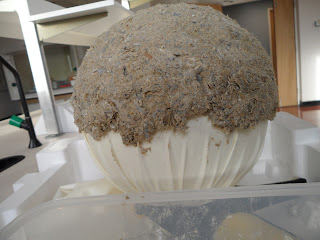 Take the papier mache and model it around the half-sphere. Easy enough. Or so I thought. To give it even more stability, I gave it some PVA icing, like this: 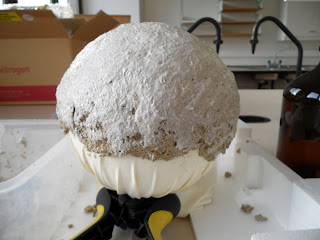 While the PVA dried, the papier mache underneath didn't, not even a bit despite an electric fan pointing at it for hours. The effect: after two days it was still pretty soft.

To contain the mistake I made, I tried to peel off the layer of PVA: 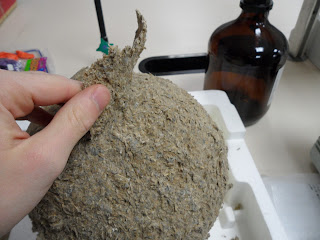 Which again, wasn't a great idea, the papier mache layer was very thin now and, to my surprise, still wouldn't dry on the inside. When I took it off (take the ball out first, then carefully tear out the latex), it came apart.

That was the sad end of my first attempt.
Posted by Lukas at 04:01 No comments:

Papier Mache (how the cool kids do it)

The idea of using papier mache was not mine, Andrew Downie from the Edinburgh University Physics Department raised this idea and he therefore deserves full credit for it.

I followed the recipe I found here. There are some more tips there, so if you want to do it yourself, go look there as well.

Here are a few photos of the papier-mache production process: 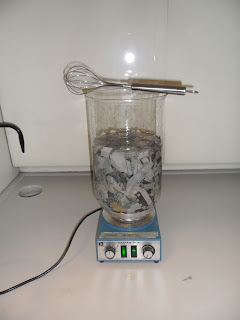 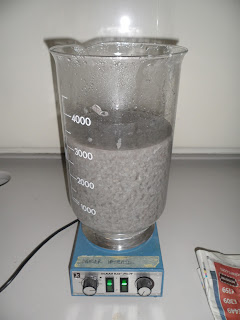 Making pulp: anyone who ever managed to cook pasta should have the skills for this step. Tear up newspaper, put it into any kind of pot, pan or beaker and cook it. Whisk it with a standard whisk every 30 minutes to turn the newspaper into mush. 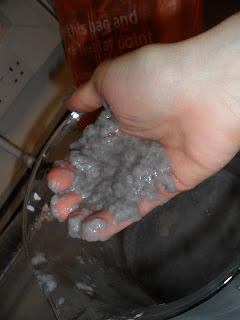 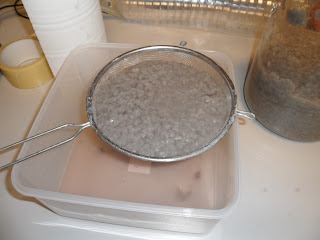 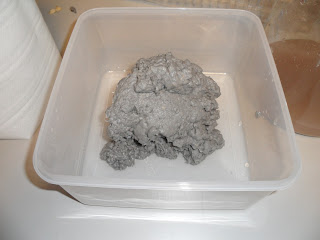 Once it has all come apart, you have to drain the water out of this disgusting soup. A standard kitchen sieve will do, but you will have to use your hands to squeeze the remaining water out of the paper, just dumping it in the sieve won't do by itself. 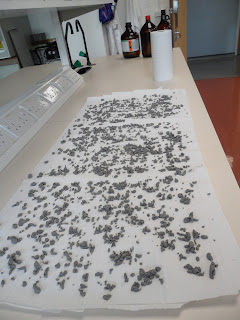 Once you got most of the water out, you need to scrunch it up (I rolled it between my hands) and dry it. An electric fan can do wonders if you don't have much time. 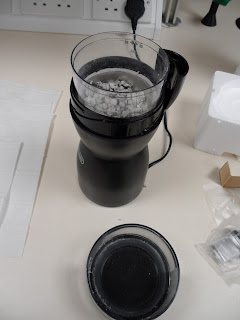 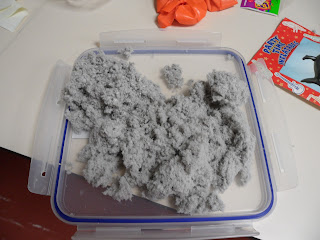 This stage is rather crucial. Get a cheap blender (I got this one from Argos for £20) and blend the dry newspaper, only small amounts at a time. The difference is huge, you end up with very fluffy and slightly dusty pulp, perfect for papier mache!

Next step: mix it up!

Mixing in the other ingredients is very straightforward, but I made some pictures anyway: 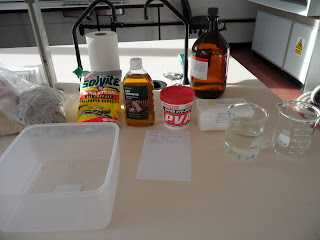 Here is the rest of the party: Sawdust (on the far left, being pushed out of the picture by the pulp), wallpaper paste, boiled linseed oil, PVA, whitening and some water (ignore the huge bottle filled with a dangerous fluid, this is a research facility after all) 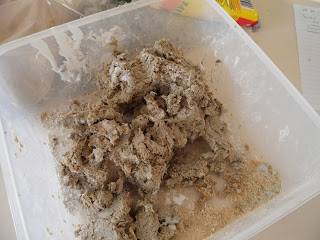 essentially what you do is to throw it all together and mix it well. In the original recipe they mix it with a T-shaped mixing bit attached to a drill. If you do that I think you'll end up with a smoother paste.
Posted by Lukas at 03:05 1 comment:

The spherical treadmill has given me a bit of a headache from the start. To have the styrfoam ball sitting comfortably on an aircushion, robust enough to move smoothly even when there is a mouse on top turns out to be more challenging than I thought. A key problem is that the cup needs to be of exactly the right size, and ordering such a piece custom made is expensive business. I could 3D-print one (£ ~800 excl. VAT) or cast one (even more expensive). In times of financial crisis and budget cuts for research I can't possibly spend that much money if not absolutely necessary.

Because handcrafting is fun and reminds me of my primary school days, I've decided to try papier mache. Not just any papier mache, but a recipe I found here: http://www.papiermache.co.uk/tutorials/some-advanced-papier-mache-recipe (Hard Mache). Doing that I realised one thing: back in primary school, papier mache was always very messy, but I thought that was because I 'm young and didn't have the coordination. Now I'm old(er) and it's still messy business. If you are a primary school kid reading this and crying yourself to sleep every night because you got papier mache on your favourite jumper, know this: it will always be messy, don't put yourself down, you're great.

Here are some pictures of the 3-d model I made. Frankly, the papier mache part will look very different, but this model could be used for 3d-printing or any other service (these models have been done with Autodesk Inventor 2011, under an educational license. I'm happy to send them to anyone interested as long as it is only for non-commercial purposes). 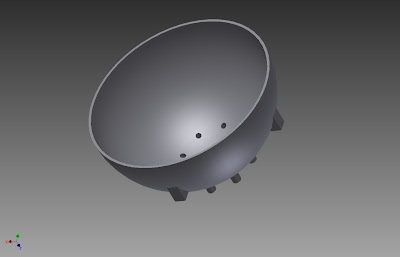 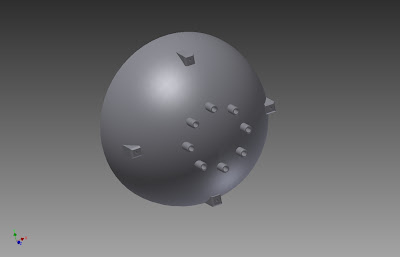