We do what we must because we can. And so I finally constructed the long promised aperture that blocks any unwanted light and shadows from reaching the screen. Up to now I had a brightly lit rectangle with a round shadow on the screen. While it was clear to me that this would be gone in the final version it did confuse many people I presented my work to. Below is a picture of that effect.

The initial plan was to calculate the exact shape I need to only let light through that will also hit the mirror (see this post for details). However, since the light at the level of the aperture is still unfocused it was difficult to calculate exactly how big the opening had to be to catch all of the overshooting light. Therefore, I decided in favour of a Thorlabs aperture with a maximum opening of 75mm diameter. This way I could close it as far as necessary. It is mounted on the poles that also hold the flat mirror. At this location it is as close to the mirrors/screen as possible (with respect to the path of light), without interfering with the VR projection.


The aperture has just the right size. If it had been too small I could have mounted it a bit closer to the projector. This would have meant the picture is even more unfocused which in turn means I would also block more light that is meant for the screen and thus have less contrast/brightness.

The reason why we can't just tape some cardboard on the back of the round mirror to catch excess light is because the light deflected from the convex mirror (better known as Angular Amplification Mirror or AAM, see previous posts for more information) goes right past it.


As you can see in the picture of the aperture, the frame of the aperture isn't big enough to block all of the light, so I repurposed an old diary of a colleague (hope she'll never read this) and turned its hardback cover into bits of aperture. In the end it actually looks a lot more professional than it really is. 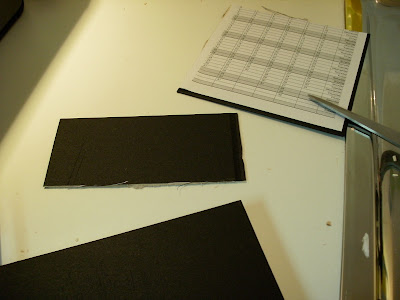 With that done the virtual reality looks a lot better and less confusing. The virtual reality is starting to look pretty good now and I keep wondering whether there is a way to upscale this for human use. Not for science, that is.
Posted by Lukas at 04:01 No comments: