After a 9-month hiatus it is high time to start updating my blog again. The reason for the lack of attention for this blog was, well, that I had to do science. Most of the technical aspects of my setup are finished and the current framework in which we conduct science unfortunately doesn't reward sharing scientific progress in real-time. For the remainder of my PhD however I am planning to update more regularly again, describing the components not on here yet and sharing more detail about the ones already mentioned.

In the meantime, Christoph Schmidt-Hieber (UCL) has started sharing some code for his/their virtual-reality setup (link). In his first batch of uploaded data he shares the code for reading mouse-input directly. I highly recommend having a look if you are interested in setting up such a system.

Since my last post I have improved my light-source a little more. The system I built here produces enough light, unfortunately it also introduces a lot of electric noise into the system as electronic components have to be placed close to the recording site. To get around this I ordered a light-guide and a condenser lens. These I have combined with a 7-LED assembly (using Luxeon Rebel LEDs) and a LED driver unit for easy power supply and dim-control.

Seven LEDs of this rating need an appropriate amount of cooling so the base-plate was mounted on a fairly big heat-sink. Again, my heat-dissipation assessment was done by keeping them on for a long time and seeing if the heat-sink becomes too hot.

Feeding light into a light-guide is a rather simple process if you don't care too much about leaking some in the process and since I've got enough light to illuminate a mid-sized apartment, I don't. The condenser-lens concentrates the beam at a 25mm distance and creates a waist of 12mm. To capture most of the light I chose a 1/2in (12.7mm) light-guide and mounted it at the appropriate distance. While there are certainly mores sophisticated ways to do this, a simple base-plate and cube of aluminium did the job.


The initial idea for my light-source included having a well circumscribed spot so we can illuminate the craniotomy without shining too much light into the eyes of the mouse. For that end I use a focusing-assembly. It is provided by the same company as the light-guide so the parts fitted together without any hassle. The result is a very bright, well focused-spot, perfect for my purposes. Having the LEDs away from the recording site also means that there is no noticeable noise introduced into the system. Finally, the heat produced at the end of the light-guide is minimal so no IR-filter is necessary.

The circuit for switching the light on and off as well as dimming is still in the same box I used before. I won't go into detail about the circuit for the LED-driver as the spec-sheet that comes with it contains all the information and also because I forgot to take a photo of it before boxing it up. I have, however, made sure again that it is simple to use and clean. An on/off switch and a dimmer knob are the only visible components.

Yes, it could have been bought off the shelve and I can't blame anyone who does. However, there are some advantages: I couldn't have taken a commercial light-source and mount it into my system as easily as this. Further, the dimmer switch on my system is easily accessible and turns smoothly. My experience with commercial solutions is that the dimmer knob often takes some force to turn, making it difficult to operate with one hand while looking down a stereoscope. I use the dimmer-function quite often to keep the animals as undisturbed as possible during virtual foraging. I leave the lights off and, if I need light, keep the brightness down as much as possible. Finally, I could use LEDs of various wave-lengths, such as red, to disturb the animal even less.

This solution has been used in experiments and works very well. I can use it in its current form for all my experiment without having to move it in any way, an important point when it comes to streamlining experiments and keeping awake animals calm. This completes my 3-post series on making a light-source, I hope it is helpful for some.

PS: An even better Solution

A colleague who has helped me a lot over the past 2-3 years with all electronics-related things has picked up the idea. He happened to have a broken light source kicking around (after disassembling it turned out that only the power switch was broken. Oh well). He yanked out the insides and replaced them with the components described above, although he did refine the circuit a little bit. The result is a light-source that can't be distinguished from the original on the outside, only that it has higher brightness, higher efficiency, longer lifetime at a much smaller cost. 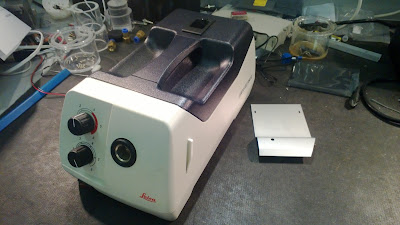 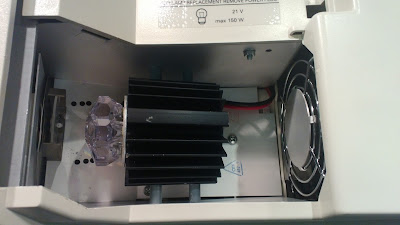 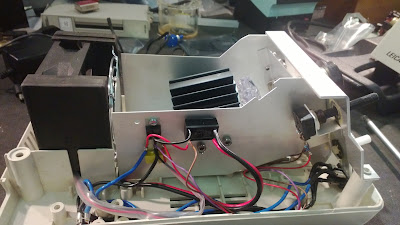