My Gun is Hot

my soldering gun that is, of course.

To cut the polystyrene-cup into shape, a soldering gun was fitted with a wire of appropriate shape (pictures below). Using a knife might work for the crude shaping, but it doesn't replace hotwire-cutting for more delicate jobs. In my case this was to reduce the thickness of the walls as otherwise there wouldn't be much space left to position the required posts and holders around the treadmill (for head fixation and micromanipulator, see "Mouse Virtual Reality - The Principles").

Using a copper wire wasn't exactly the best choice as copper has very low resistance, but really what we want is the opposite, high resistance means a lot of heat. Also, good conductance means a lot of current is being drawn, so while I was happily cutting away, somewhere in the distance they were probably powering up an additional nuclear reactor to satisfy demand. I'll put this under "lesson learned for the future". Moving on.

As usual, I've documented the process by taking pictures: 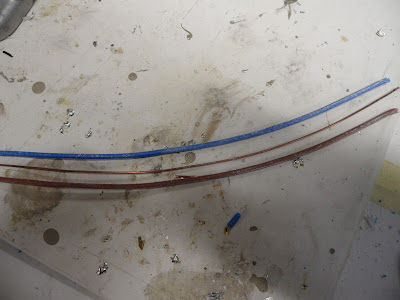 Once you remove the outer insulation, you end up with 3 seperate wires, the one without insulation is the ground, which was subsequently formed into my cutting tool. 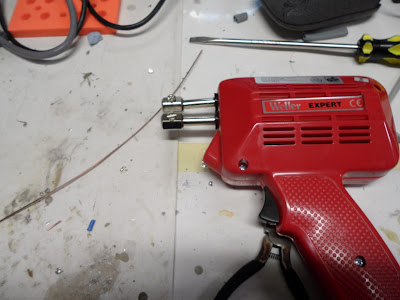 This is the soldering gun, with the standard soldering tip removed. 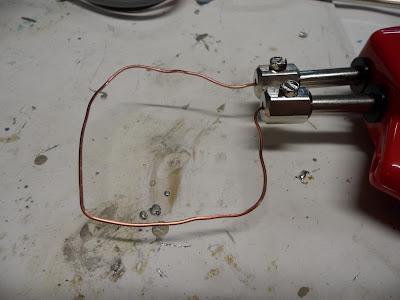 Without much effort you can bend the wire into an appropriate shape and fix it to the tip. Now the hotwire cutter should be ready to go. As became apparent later, my wire was a bit too thin which means it deformed quite easily while cutting and I had to be a lot more careful.

Once the tool is ready we can start with the cutting procedure. The goal is to make a cup like this: 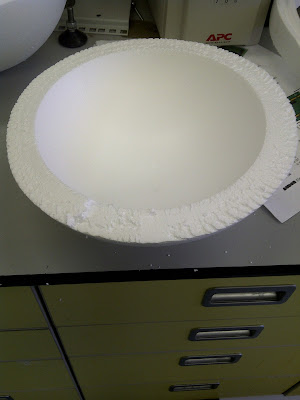 For that end, we take a whole half sphere, and start taking about 2cm off the edge. To guide my cut I cut a small ridge with a knife where my cut should be. I then just followed that ridge with the hot wire: 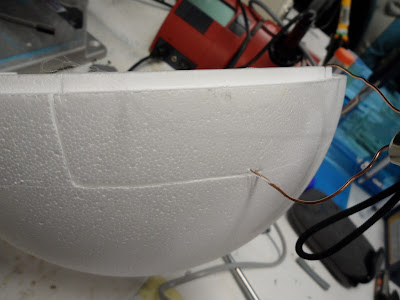 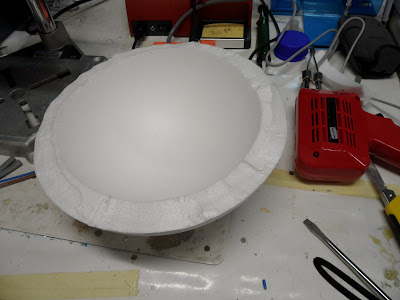 To reduce the spatial profile, some of the wall should be taken off. The shape of the wire can pretty much stay the same for this job. First I've taken out a small portion to place the hot wire properly, and then cut all around the cup in the same fashion I did earlier. 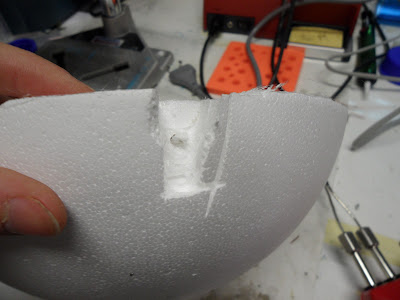 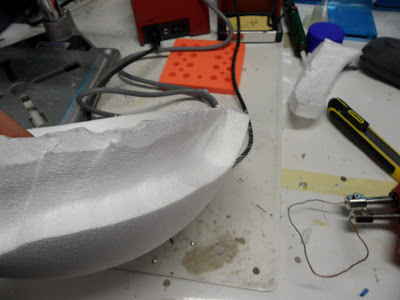 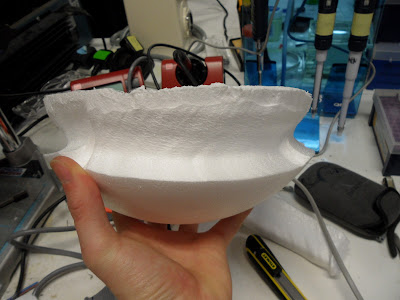 Above is the finished result. It's anything but pretty, it should do the job however. That is, if you don't cut through the wall and have to start all over again 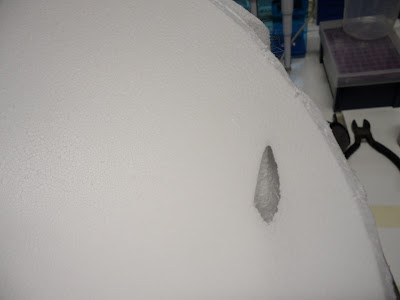 (this is where I cut through the wall).
With this done there is nothing stopping me from putting the cup on my airtable. One of the next posts will contain a decription of the tubing system that will guide pressurised air into the cup.
Posted by Lukas at 07:54 3 comments:

Cheap is good. And works.

After ordering a moulded 200mm sphere and putting it into a cup made out of a 250mm hollow half sphere, it seems  like we've got a working spherical treadmill. Before I post a brief video of the result, some credit must be given out:


This is the result:


The next few things on my to-do list for the setup are:
- set up the optical mice so that they track the movement of the ball
- set up mirror and screen for the virtual reality
- program the virtual reality environment
Posted by Lukas at 03:12 No comments:

The idea was sound...

The 2nd attempt on a papier mache cup failed (no pictures of yet another failure!). The hotwire-cut polystyrene balls are simply too uneven in shape which caused big cavities between ball and cup.

Luckily, the woman at Graham Sweet Studios (where I purchased the polystyrene balls from) mentioned that the inner diameter of the 250mm hollow-half spheres might just be the right size. So I tried.

I cut about 2cm off the edge of the 250mm half sphere as that should leave enough of the cup for the aircushion to form and at the same time allow more room for uneveness of the ball: 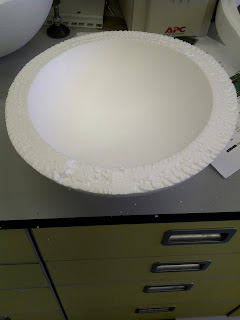 Here is the result:

The result isn't yet convincing, but the key problem here was again the unevenness of the ball rather than the idea. To circumvent this, molded 200mm balls, which come in two hollow halves, have been ordered. With any luck, they will fit nicely.
Posted by Lukas at 06:51 No comments: