In brief: I want to build a heating mat that keeps animals warm while under anesthesia. Three components are required for that: a heating blanket, a thermometer (thermocouple to be correct) and a PID controller that regulates the heat output to keep it at a set point. In other words: if the mouse body temperature drops, the heating mat gets warmer to compensate. In the previous post I put together such a system on a prototyping board and here I document how I put this system into an instrument case for use on a bench.

The reason why I made an effort to put everything inside a well organised case and not just throw the prototype onto the bench is threefold:

While there are loads of generic instrument casings out there I decided to take a nice one to make the instrument look as professional as possible from the outside. After all, it has to blend in with other top notch scientific equipment. More importantly though, I don't want to give our beloved and omnipresent health and safety inspector any reason for concern. She really has enough on her plate with untidy cables, sharp screwdrivers murder weapons lying around and expired electrical safety stickers. Truly, we are blessed with a guardian angel who spots danger where lesser people (such as myself) stare certain death in the eye without even noticing.


To keep things simple, there is one mains connector and power-switch at the back. At the front we have the connector for the thermocouple and the heating mat along with the PID controller display and the buttons to program it. The heat-sink is screwed straight onto the back panel with the op-amp mounted onto a thermal transfer pad on the other side of the panel. Since heat-sink as well as panel are made of aluminium there won't be any trouble with heat-transfer.


The most time-consuming work after soldering was to cut the front and rear panel. For that I used a mill to cut around the edges. This was followed by filing the corners until the part fitted in. It doesn't have to be the cleanest job in the world as all panel-mounted parts have some extra cover material around the edges to hide the ugly.


After clipping in mains inlet and power switch as well as heatsink I placed the amplifier in the case. After that I grounded  the front, rear and side-panels for safety reasons. Top and bottom panels as well as corners of the case are not conductive and therefore don't need to be grounded. Finally, the rest of the components just about fitted in and I was able to put the lid on the case. 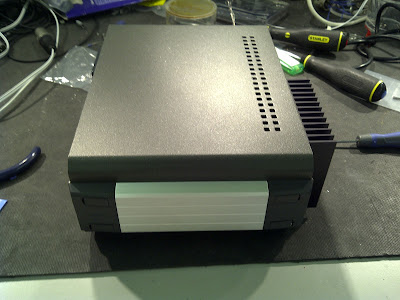 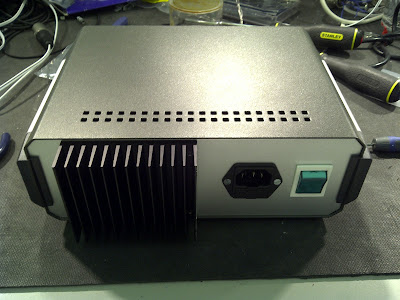 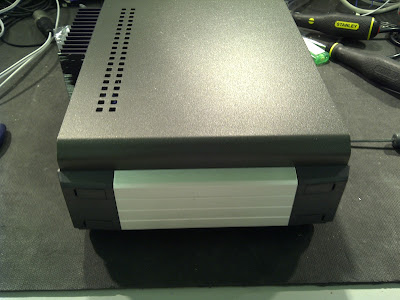 Instead of soldering the heating blanket directly to the output I wanted it to connect to the outside of the box. That way it was interchangeable so if it breaks or has to be exchanged for some other reason there is no need to open up the box. We chose a simple 3-pole connector that is usually used for microphones but has also found its place in various scientific instruments. Here are a few pictures of the construction process:

The only component I had to buy from a scientifc equipment supplier and the price made me cringe. Industrial thermocouples cost a fraction of this but I'm not confident using them with animals. Otherwise its a standard t-type thermocouple so I could just plug it into the PID controller.

The non-inverting amplifier used to drive the the mat including an RC filter for the PID output (see previous post for more information) has been soldered onto a strip board. The heat-sink has been up-sized as well as the previous, smaller one got hot to the touch.

To my surprise everything worked the first time around. No mixed up poles, no loose connectors, I switched it on and it worked. I guess you automatically put in that extra bit of caution when playing with mains power. What is left at this stage is to tune the PID controller. It is important to start with careful values as there is a significant lag between increase in heating mat and rise of mouse body temperature. More information on that on Wikipedia.